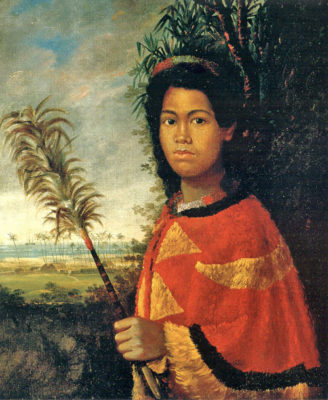 The Hawaiian Bird Catchers
The famously skilled bird catchers were often called kia manu, after the tool used to catch birds in the forest canopy. The kia manu pole was hung high up in the canopy branches with a decoy or bait and sticky paste at its tips.

When the unsuspecting bird landed in the sticky paste, they became stuck and the bird catcher would lower the pole and retrieved his bounty.

In another method, like fishermen, lawai‘a manu (bird fishers), would set up a large upena (net) across the forest, then imitate the bird (a technique called kono). These birds were then used as maunu (decoys), often stored in basket cages woven from the ‘ie‘ie roots called a hīna‘i manu.

For birds that foraged on the ground, like kolea and nēnē, expertly set pahele (snares) were used.

Once set, the bird catcher would wait behind a blind made of foliage and branches. When the bird—attracted by bait—wanderd into the snare, the long trigger line was then pulled and the birds’ legs are caught.

Insects, flowers, or fruit were used to attract a bird to the snare, depending on the species.

Reserved for royalty, chiefs and chiefesses were draped with ‘ahu‘ula (capes and cloaks) and adorned with lei po‘o (head lei) and kāhili (standards).
Woven images of the ward god, like Kamehameha’s Kūka‘ilimoku, was covered in red feathers.